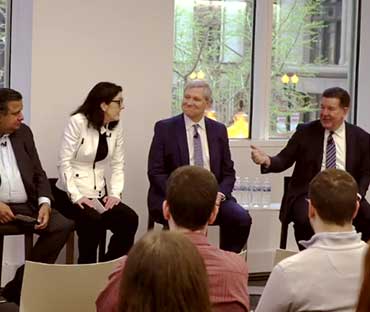 Listen now for CEO Mike McGuire’s take on how culture — through alignment and curiosity — transforms an organization.

“Culture is about aligning an organization, getting everyone to understand where we're going and all rowing in the right direction. Alignment allows you to transform an organization at pace. In today's environment, the speed and pace at which you make decisions has to be a lot faster.”

Grant Thornton CEO Mike McGuire is a confirmed believer in being intentional about culture, and for good reason: “Some people think that culture is kind of ‘initiative of the day,’ but it's actually hard business. It makes hard business sense to do it.” In McGuire’s episode of the Dose of Leadership podcast series, he explained how it works in his firm.

“We have a very talented, diverse team,” McGuire said. “We hire to our cultural principles and evaluate people based on curiosity.” A curious nature, he said, comes through in a resume and an individual’s interests; it’s a character trait to be prized for what it leads to. Employees who are rewarded for acting on their curiosity, experimenting with plans that run counter to conventional thinking, McGuire asserted, are going to find a solution.

“Get on with it,” McGuire said, is what the firm’s Status Go brand is about. “Status Go means we have a bias to action with speed to solve client problems or problems we're dealing with internally.” Grant Thornton employees are trained in taking charge of their curiosity in order to come together on solutions. An illustration is the firm’s “mood elevator,” whose middle floor — from which a decision is made to go up or down — is curiosity. Employees can choose to pause to understand a different point of view rather than immediately dismissing it. McGuire contends that much more can be accomplished with understanding and agreement.

“Our people always have an opportunity to lead and to have an influence,” he said. “It's a large team that deeply cares about and wants to help each other.”

MGuire’s excitement, he said, is the opportunity “that we lead in innovation, and that our people have a massive amount of fun doing it and feel they're part of something special.”

Play the podcast to hear how being intentional about culture nurtures alignment and curiosity to empower employees who’ll transform their organization.

Mike McGuire’s podcast is part of the Dose of Leadership series hosted by Richard Rierdon.