The tipping point for tech hubs

Technology is spreading. Not just the capabilities – the industry.

It once seemed that all of our computer and communications technology had to come from one place – a place we called Silicon Valley, as though the very land held rich deposits of silicon, innovation, venture capital and all the natural resources that budding tech requires. That became something like a self-fulfilling perception, as a growing number of companies attracted a geographical concentration of talent, funding and other resources.

But the tech mecca is dissipating. While the west coast will still remain a greenhouse for tech, some companies have moved to other new hubs across the US. The pandemic’s shift to remote work has accelerated the trend.

Has growth of remote work pushed us toward a tipping point where the balance of power ultimately leaves Silicon Valley?

“Remote work is not enough to lure leading companies out of Silicon Valley for good,” said Grant Thornton National Technology and Telecommunications Industry Leader Steve Perkins. However, he said there are a range of other factors to consider – including government stimulus and the infrastructure priorities of the Biden administration.

“The policies that are focused on job creation and re-skilling will increasingly favor technology, as will infrastructure investments to promote internet access and closing the digital divide.”

“The policies that are focused on job creation and re-skilling will increasingly favor technology, as will infrastructure investments to promote internet access and closing the digital divide,” Perkins said. The development and jobs created by these initiatives are likely to help spread established hubs and startups across a range of locations.

As TechCrunch said, “The future of startups is a decentralized, global ecosystem. Where wealth and knowledge aren’t concentrated, but shared and open – where there aren’t capitals, but networks.” So, what are the factors fueling that future?

What are the factors fueling new hubs?

Where will the new hubs, and the new jobs, be located? And, what are the essential resources that each location must foster to feed the fledgling growth? 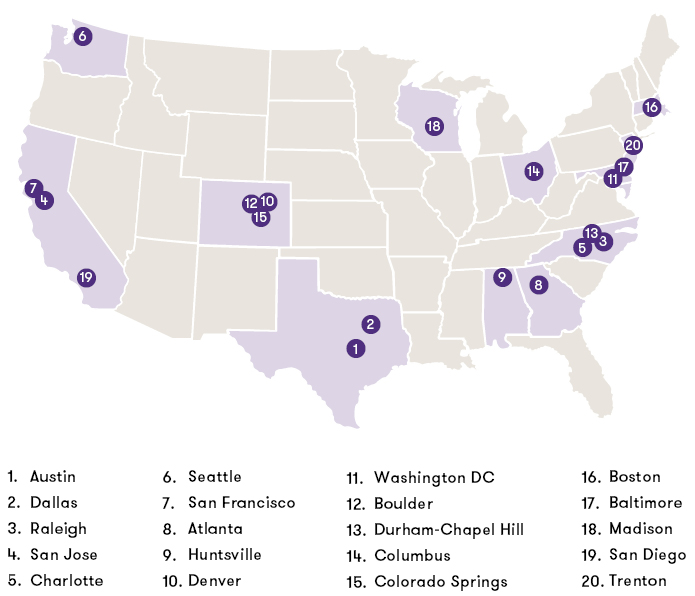 There are a few factors enabling the growth of these new hubs across the nation:

It’s not shocking that most companies – and workers – have become accustomed to delivering real results through remote work. The pandemic has forced adaptations that have often proven reliable enough for the long term. And new initiatives to expand remote broadband access could mean that workers could even maintain an always-on presence from a broader range of formerly isolated locations.

If a business can effectively shift its office costs to its remote employees, that makes it hard to argue with the savings. Even if there is a cost to productivity, collaboration or culture, the bottom-line costs look lower at the end. For the companies and work where a central office is essential, Embroker recently highlighted how Denver, Phoenix, Tampa and other cities offer lower business startup costs.

Many tech companies – especially in the B2B realm – have important customers or markets that are not based in southern California. So, savvy companies might see the opportunity to better position themselves near client hubs or other geographical needs and markets.

What about the essential resource that is private equity and venture capital? As other pieces fall into place for a rising hub, localized successes foster a climate of potential and garner the attention and interest of investors looking for new opportunities.

Cost of living and recruitment

Lower startup costs often go along with a lower cost of living for employees, and Wallethub has highlighted a formula that pairs the cost of living with employment opportunities to show that some non-traditional hubs are making their way to the top.

Workers are wise to consider a wider range of locations – although California remains a hotspot for jobs, the span of tech jobs and geographies is ever-broadening as shown in the CompTIA Jobs Report. That means that workers won’t be limited if they want or need to seek other opportunities in the area – and companies won’t be constrained by a lack of local candidates.

Ultimately, Perkins said, the most powerful factor fueling hubs beyond Silicon Valley is demographic. TechRepublic has reported that young talent might not be as married to the tech meccas as was once thought – workers are now actually willing to move to a wider range of locations.

“What will be inevitable is the shift of more people to locations across the south. But the ‘tipping point’ isn’t going to be a move out of Silicon Valley – it will just be a balance of tech hubs across a broader range of cities.”

“What will be inevitable is the shift of more people to locations across the south,” Perkins said. As a lower cost of living and broadband connectivity attracts young talent to a wider range of locations, companies will follow the talent. “But the ‘tipping point’ isn’t going to be a move out of Silicon Valley – it will just be a balance of hubs across a broader range of cities,” Perkins said.

With the trend toward a more balanced distribution of hubs, tech companies need to choose their best move.

What’s best for you?

It’s clear that a number of factors are leading some technology companies to consider new locations beyond the traditional confines of Silicon Valley. Still, for new startups or established companies considering a move, the central question is: What’s best for us?

The answer will vary for every tech company, but there are some key factors to consider up front:


In the past, tech ventures have often struggled outside of the warm embrace of Silicon Valley, the Pacific Northwest and perhaps “The Hub” of Boston. But social norms, business cultures and technical capabilities have shifted the equation in the past year – and it might be that innovation and funding are finally reaching scale at locations where a range of other factors offer greater advantages.

It can seem risky to think you can replicate Silicon Valley’s apparent alchemy of success somewhere else. But the truth is that any company’s success is actually built on a number of factors – and that any company faces a range of risks.

To prioritize your actions and investments, you need to understand your new risks and opportunities. Your market landscape, business model, competitive position and existing relationships all factor into the best location for your business. It’s only by truly understanding the factors for success and the risks of failure that a tech company can draw a map to success from any location.

What is clear is that technology companies can take a growing number of paths to success, and that there are some emerging signposts along the way. 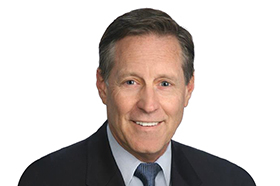 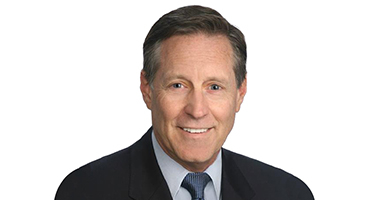 Steve Perkins is the national leader of Grant Thornton's U. S. Technology and Telecommunications industries. He works with technology executives to help drive profitable growth and optimize performance of business units and supporting functions through technology-driven transformation.